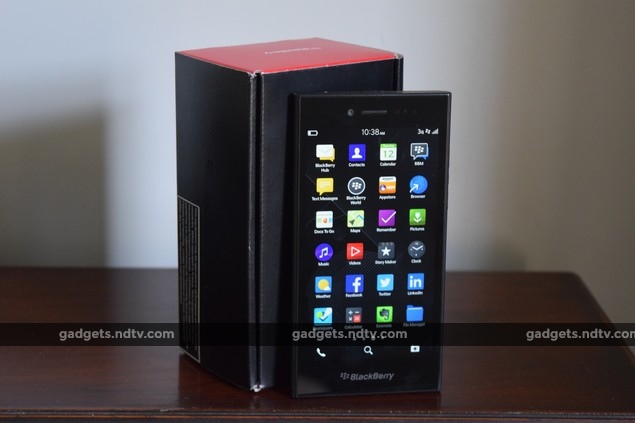 BlackBerry, once considered the king of the smartphone segment, is trying to keep itself relevant in today’s date. The company is working on a new strategy for this. Earlier this company was mainly in the business of making handsets, now it is providing services for all platforms. To a large extent, this strategy has proved to be effective.

In terms of hardware, BlackBerry has kept its focus on business users and the enterprise, and also has no plans to invest in the Rs 10,000 price range segment. Every phone launched by the company is for a specific customer group. The BlackBerry Passport is for the customers who expect top quality and stand out from the crowd. The BlackBerry Classic is for QWERTY keypad enthusiasts, and now the BlackBerry Leap is for touchscreen users who think the device might be better than the current product. It is clear from the company’s strategy that BlackBerry Leap is not for the price-conscious customers. Read the review of the phone.

look and design
The BlackBerry Leap is an elegant phone with a sleek black front face. You will not be able to see anything except the company logo in silver color at the bottom of the screen. The sides and back of the phone have been given a rubber finish, which works to give it a premium look. You can’t remove the backcover of the phone, so you can’t access the battery. We saw only one drawback in the look, the label of 8 MP auto focus next to the rear camera was very strange. Well it is a very professional looking device.

There are many similarities between the BlackBerry Z3 and Leap models that were launched last year. If you do not know much about both the phones then you will not even be able to differentiate. The Leap model is a few millimeters wider than the Z3 model and also a bit heavier. However, there are some differences between the two phones as well, such as the power button on the top. The SIM and microSD card slots are on the left and the volume control buttons are on the right. The 3.5mm audio jack is on the top of the phone and the micro USB port is at the bottom.

Leap is available in Dark Gray and White colours. The phone looks solid and reliable. However, it is too big to be used in one hand. The company seems to have re-used the same look, taking seriously the positive feedback the Z3 has received for its build quality and styling in certain Asian markets. Shockingly, the Leap isn’t made by Foxconn, the company that makes the Z3.

Specifications and software
The Z3 was a budget segment phone, so there was a slight lack of specifications on this product which is not with the Leap. The display of the phone has been greatly improved, the resolution of the 5-inch screen is 720×1280. While this isn’t a unique feature, it is much better than the Z3’s 540×960 resolution screen. Texts look quite crisp, colors do not strain the eyes, overall the phone gives a fun experience. There are some drawbacks regarding the display of the phone in sunlight. Sadly, the Leap has done just that in terms of improvement from the older model.

It’s surprising how far technology has come from, but BlackBerry is still powered by a dual-core 1.5GHz Qualcomm Snapdragon S4+ processor. The company started using the MSM8960 processor in the Z10 model two years ago. If BlackBerry has to compete in this price range in terms of performance, then this strategy is wrong.

Rest of the specifications of the phone are a bit modern, but not high-end at all. The phone has 2 GB of RAM. The handset comes with features like 16GB of internal storage, support for microSD card up to 128GB, Wi-Fi b/g/n and Bluetooth 4.0. Sadly, there is no support for LTE in the Indian band of 2300MHz. Its battery capacity is 2800mAh. You get a proximity sensor and a basic accelerometer. The features provided by BlackBerry do not impress you.

The company claims that the value of its platform is in software and services. BlackBerry is the second company after Apple to have its own hardware and operating system. The company expects people to trust Leap to get their work done. BlackBerry OS 10.3.1 has many cool tricks, you can use most of the Android apps and it has a central communications hub through which you can easily view messages from many services. However, we’re not quite satisfied that the different gestures are the most natural way to use the OS. On the other hand, the touch keyboard of the phone is the best ever.

In terms of features, nothing much has changed since the launch of the Z3. However, one difference is that instead of 4 app tiles on the first menu page, there is a limit of 8 menu tiles. This has been made possible by increasing the RAM.

performance
During several days of use, some shortcomings were noticed in the BlackBerry Leap. At times, while launching or switching apps, the phone went into pause mode for a while. Some OS animations were taking too long. However, there was no problem when using Interface, Hub and other simple apps.

Not everything can be told about the capability of this phone based on Android benchmarks. In the cross-platform browser based SunSpider and Mozilla Kraken tests, the phone got a score of 1284.8ms and 26889.7ms respectively. Some similar figures are also seen in ultra-budget Android phones. The battery lasted for 7 hours and 19 minutes in the video loop test, which is respectable, but not spectacular. The battery performance of the phone was good. Call quality was also excellent.

Camera performance is good, not very good. But it works well for casual shots. Textures come out beautifully. There is also less noise and compression in the image. However, the frames get messed up in capturing the photo of the moving object. At night the photo came from the camera well. The default video of 720p is shot through the camera which is sharp but also a bit shakey.

our decision
Talking about the price, BlackBerry Leap competes with a great Android device like OnePlus One. Due to this, many Android phones give a tough competition in terms of experience for half the price or less. Commitment to the BlackBerry platform could be one of the reasons to buy this phone. The biggest difficulty of the company is convincing people to use the BlackBerry platform.

The good thing for the company is that many people are committed and there may be more in the coming days. The phone’s target audience is young people, or professionals who are ready to shell out money for hardcore business tools, but this smartphone is great for the job. There is also a possibility that many corporations will buy this phone in bulk for their employees in view of Secure Communications.

If the Leap is treated like a secondary phone and is only used in the workplace, BlackBerry will win. This is enough to sell the company’s products, thus keeping BlackBerry relevant. By the way, we would like the company to be aggressive and invest in the mainstream pricing segment.