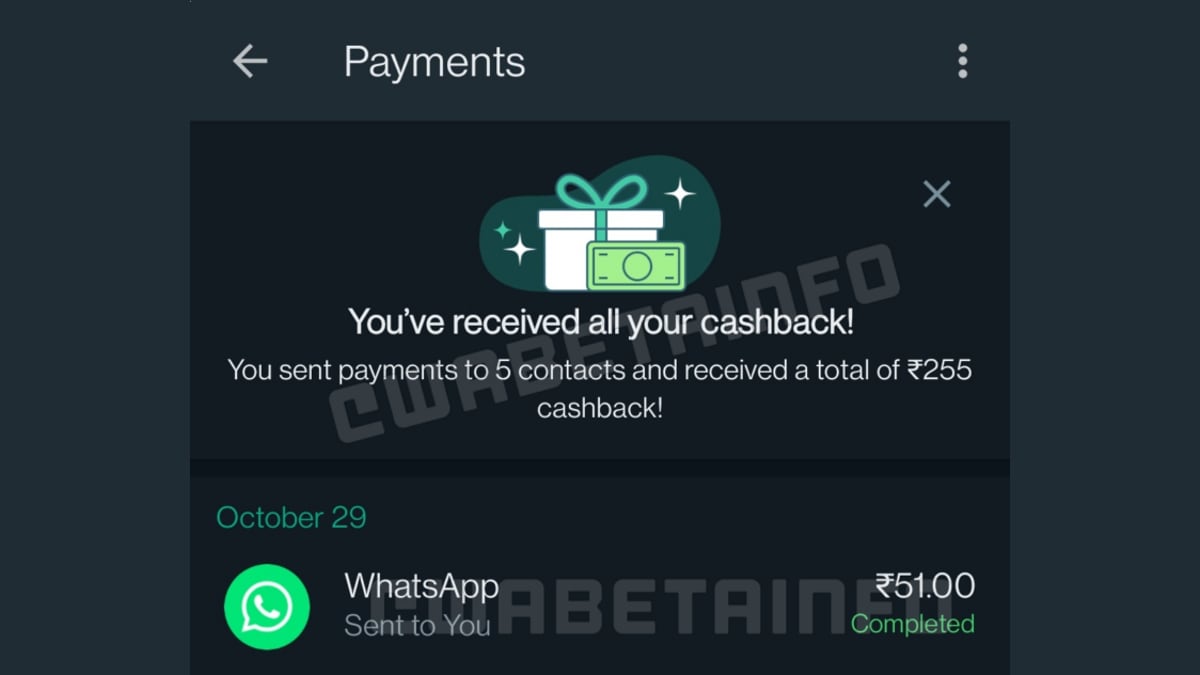 WhatsApp is rolling out the cashback feature for users using its Payments feature. As the name suggests, this feature offers users cashback on UPI transactions through WhatsApp Payments. It is being told that this feature is being rolled out for Android and iOS beta users. According to WABetaInfo, a website that tracks the features of the app, the cashback feature may be available only to select beta testers, which means that not all users using Payments will receive the cashback. There is currently no clarity on when this feature will be rolled out to all other users on WhatsApp.

WABetaInfo introduces cashback on WhatsApp Payments Report has given. This was noticed by Vipin, an Indian follower of the website, who after sending money to five contacts received a fixed cashback of Rs 51 on each payment, i.e. a total cashback of Rs 255. The screenshot shows a notification from WhatsApp, which has congratulated the user for receiving the cashback. The website believes that this may be a limited promotion to attract more users to WhatsApp Payments.

Meanwhile, the feature tracker said that the WhatsApp Payments Cashback feature is enabled only for select beta testers. There is reportedly no way to enable the cashback by itself. There is also no clarity on how WhatsApp selects users to test this feature. However, the tracker recommends using WhatsApp Beta for Android on the Play Store and the latest version of WhatsApp Beta for iOS on TestFlight to increase your chances of getting the cashback feature, which is currently available for Android 2.21.22.21 and above. For iOS it is 2.21.220.14.

This also Told It is being told that this amount of cashback is fixed at Rs 51, even if the amount of payment is Re 1 only. Apart from this, the instant messaging app has collaborated with five Indian female artists to introduce a new pack of payment stickers to its users in India. These stickers are essentially built on various cultural expressions related to money exchange.