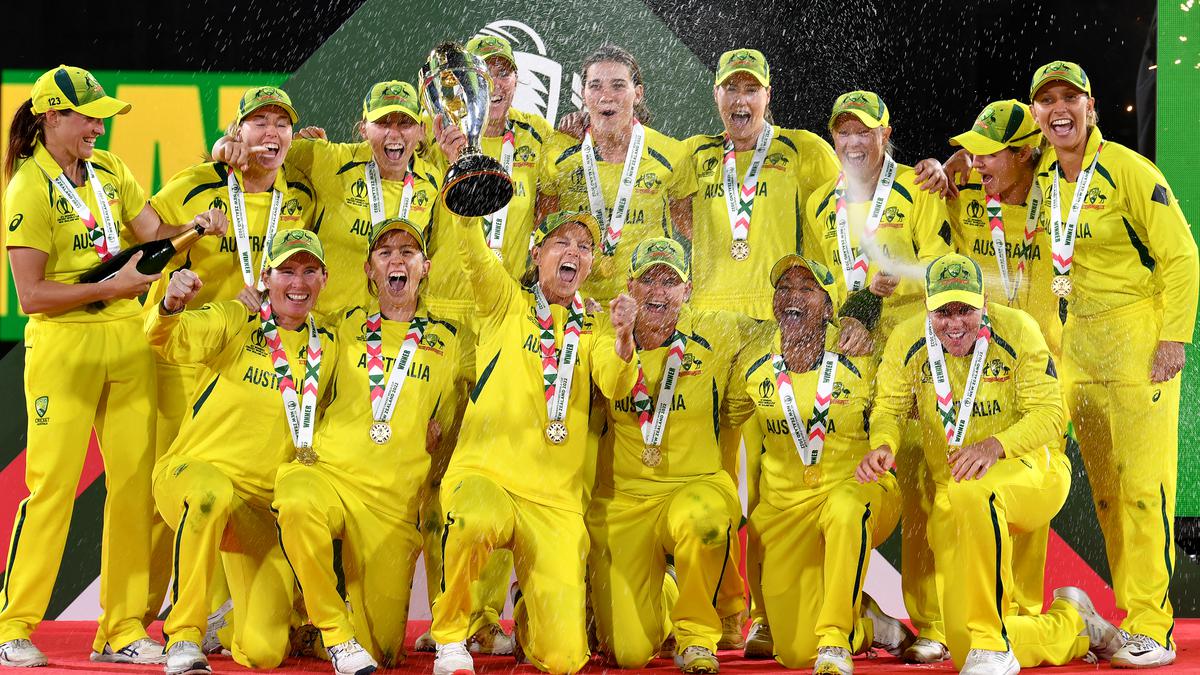 It was 2017. And in a rain-marred ODI World Cup semifinal, Harmanpreet Kaur’s monstrous unbeaten 171 ended a confident Australia’s run in the tournament.

Five years later and with the benefit of hindsight, you can now recognise this as the origin story of an Australian side, which since that World Cup has registered an astounding 40 wins in 42 ODIs.

The 40th victory also brought with it a shiny piece of silverware — the ODI Cricket World Cup (CWC 2022) trophy.

It’s easy to give in to the drama of this storyline. But the actual credit goes to an oft boring and oversimplifying word — process.

The difference is staggering. While Australia has lost just two ODIs in 42 since that 2017 World Cup, the next best side — South Africa — has lost 12 of 51 games in the same period. England comes third with 21 losses in 50 games, with India fourth on the list, with 25 losses in 47 games.

Australia’s success is not just based on hard work, but also on a system which helps the players realise their potential.

“In Australia, we don’t see cricket as a men’s sport, we haven’t for a long time. That push for inclusivity, for all genders, age groups, and levels to take to the sport has allowed the system to be what it is today,” says former Australian cricketer and World Cup winner Lisa Sthalekar.

Australia has a robust club cricket ecosystem that feeds state associations, which then field teams in tournaments such as the Women’s National Cricket League (One Day) and the Women’s Big Bash League (T20), which was not stopped during the COVID-19 pandemic. This system, along with regular international fixtures, has allowed the senior team to get both ends of the scale right – establish a core and nurture a qualified fringe.

“Australia has a core group. England too has a steady group around which the team culture has been built. This lot understands each other’s roles and what it brings to the side. They have been easy to construct around. Where Australia stands out from the others is, you’ve got an Alana King or an Annabel Sutherland or Amanda Jade Wellington or Tahlia McGrath… Amanda and Tahlia made their debut back in 2016-17 against South Africa, were dropped but still have competitive cricket to go to. Our domestic players are not fulltime, but they have the resources to try and come back into the Australian team on merit,” Sthalekar says.

England legend Charlotte Edwards thinks England, too, has benefited from a well-oiled structure that has helped the nation to find someone like Charlie Dean, who took 11 wickets in this World Cup including a four-wicket haul against India.

“Over the last few years, Charlie has made the transition from domestic cricket and The Hundred to international cricket. She’s come through a system that has been professional and she’s had great support across the board from strength and conditioning to everything else. It’s not just about the cricket. It’s all the other facilities and getting the opportunity to access them that has made the difference,” Edwards says.

“Two years ago if you had told me Charlie Dean would play in a World Cup final, I would have found that hard to believe. But if this is how much two years of professionalism can give us, it makes me hopeful for the future.”

England gave its domestic structure a makeover, bringing in 41 contracts across eight regional teams. That number rose to 51 in 2021. Tournaments like the Charlotte Edwards Cup, the Rachel Heyhoe-Flint Trophy, and now The Hundred have added to the opportunities female cricketers can cash in on.

The Hundred is hoping to have a similar long-term impact the WBBL has had in Australia. Sthalekar underlines competitive cricket is not the only advantage a tournament of that nature provides.

PODCAST | The full chat with Lisa Sthalekar where she shares how far this Australian side has come thanks to some foundation work that began over a decade ago.


“There’s TV, there are interviews, crowds, finals, pressure, fireworks — it’s the whole occasion. You get a sense that everyone is watching. You can’t train for that. Take the 2020 T20 World Cup final for instance. Two great sides — India and Australia in the fray — but if you looked at the faces of the Australian team, they were all just smiling. Now I know it meant probably a little bit more to Australia because there was the 86,000-strong audience and it was in your home country and the history of it all, but they just soaked it up and they smiled and enjoyed it. I feel the Indian players experience pressure like no other country because you know everyone stops when they play and everyone’s a pundit, everyone has an opinion and everyone’s quite happy to tweet it out as well. The Indian players just don’t experience such pressure enough at the domestic level so it’s a huge step up, whereas the WBBL has been the bridging gap for us,” she adds.

“That has been the main reason why we have hardened cricketers coming into our side and it’s not taking a few years for them to get comfortable and settled. They come in and bang, get on with the job.”

WATCH | Heather Knight and Meg Lanning on the domestic systems in their respective countries. Knight also touches upon whether England can catch up with Australia in strengthening the ecosystem

WIPL not the only solution

“We must keep the IPL in a separate enclosure because the dynamics of the league are different, the objectives are different. The IPL does not guarantee sure-shot solutions coming along with it. Domestic cricket is all about providing a platform for cricketers from a young age to make cricket a career. The IPL will serve as a launchpad for cricketers to play a high level of competitive cricket with and against the best in the world and possibly make a lot more money. Comparing the two is akin to comparing a grown individual with somebody who’s learning to walk.” he says

One way of bridging the nerves at the senior level is to increase A tours, something Australia head coach Matthew Mott and Raman have relied on. Australia and England have had A teams play alongside senior sides on tour, exposing the girls to international game environments and potentially opening a path to the senior side. Edwards hails this as something countries can follow for the next World Cup cycle.

“Countries like the West Indies, South Africa, and New Zealand need to have A Programmes, U-19, and better domestic structures in place. The women’s game must be sustainable. If you don’t have the underpinning levels, where is your talent going to come from?” she asks.

READ |
Alyssa Healy: With WIPL, India is going to be unbeatable in 10 years

The U-19 T20 Women’s World Cup scheduled in South Africa for January 2023 comes at a perfect time to give countries a reason to kickstart or revitalise age group competition. A surge of domestic T20 leagues – from the Women’s IPL, Pakistan Super League to a Caribbean Premier League – will also provide more opportunities.

“We’ve not seen a new player come out from the West Indies since Hayley Matthews and that was six years ago. You’ve got to invest, and I know they’re doing a CPL which is a big step in that direction,” Edwards points out. “I find it unbelievable that the women’s IPL hasn’t happened before.”

The Women’s T20 Challenge, a three-team four-game exhibition tournament, returns this year after being cancelled in 2021 due to rising COVID-19 cases in India and eventual player unavailability. India has had the Challenger Series and the Senior Women’s One Day tournament in the last few years. The Senior Women’s T20 tournament gets underway this month. However, regularity of these tournaments in the domestic calendar is yet to be achieved.

A new World Cup cycle is a clean slate. A chance to keep doing the good stuff better and right the wrongs. For all the teams –besides Australia and even England – the checklist looks long and daunting. Where does one start?

Sthalekar suggests looking at the grassroots.

“When I worked with New South Wales, we went to schools and had T20 blast competitions. The requirement was that a school could field a boys’ team only if it also had one for the girls. Simple rule changes ensure cricket is open to everyone,” she says.

“At a higher level, it is important to just ensure regular cricket happens. India’s domestic season is set to begin this month and that’s a great place to start. Build tiers from these domestic competitions that can ultimately help you identify individuals for your senior team.” Sthalekar also believes that a separate administrative division to handle the women’s game could help the process and it does not necessarily have to start at the BCCI.

“I don’t think there’s anything stopping states from doing that. I don’t think any mandates stop states from employing someone to solely look after their women’s programmes. This can make a big difference in how these systems take shape,” she adds.

What does a fresh start look like for a team that’s sitting on a mountain of silverware and records? The answer lies in a succession plan – something Sthalekar and Edwards both believe the teams need to approach head-on.

READ |
Shantha bats for Smriti to be next India captain


“I look at this team and they’re once-in-a-lifetime players and some of them are going to retire. That’s going to be a big gulf for Australia to fill so they must start blooding new players. I wouldn’t be surprised if a few players retire in the next 12 to 18 months. So many of these players started playing so early on that they probably want a bit of a life. So, it’s about making sure that the next players coming through can pick up where they left off, which will take some time and the Australian team may take a bit of a hit,” Sthalekar says. Edwards says, “I’m not writing people off that are already on the team, but I think we’ve got to know the type of players we want to take to that next World Cup and it’s good that we have competitions to choose them from.”

With the Aussies and even the English already working on a succession plan, the other nations will need to do a lot more to catch up.