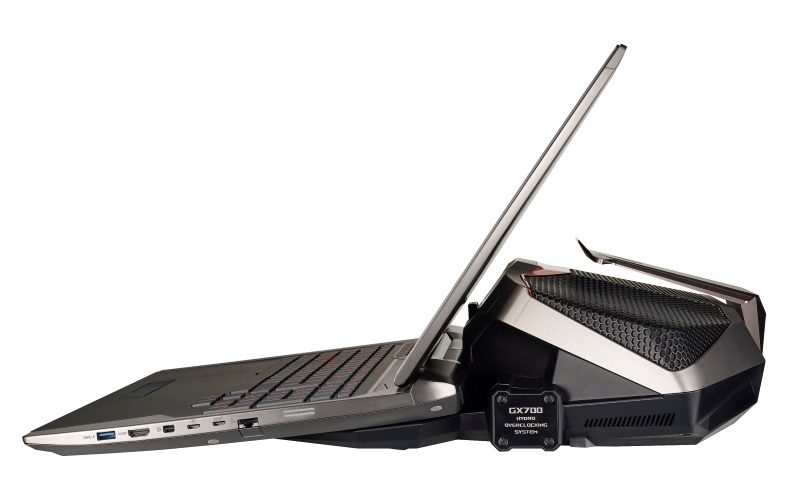 Asus under the Republic of Gamers series of gaming hardware, has launched the ROG GX700 premium gaming laptop. The laptop comes with a detachable ROG Exclusive Hydro Overlocking System cooling module that houses dual 92 mm radiators. The company says that they can also dissipate more than 500 watts of heat. A suitcase with ROG theme comes with this laptop. Users can opt for the traditional cooling system without overlocking modules as per their choice.

ROG GX700 is powered by 6th Gen Intel ‘Skylake’ Core i7-6820HK processor clocked at 2.7GHz. This laptop has 16 GB DDR4 RAM which is expandable up to 64 GB. For graphics, the company has given a separate Nvidia GeForce GTX 980 GPU which is equipped with 8 GB GDDR5 VRAM.

According to Asus, the hydro overlocking system of the ROG GX700 not only provides cooling capability but also creates the potential for superior overlocking. The CPU can be overlocked up to 48 percent and DDR4 memory can be overclocked up to 43 percent. The ROG GX700 Gaming Laptop features a 17.3-inch 4K UHD (3840×2160 pixels) monitor with Nvidia G-Sync technology.

Asus ROG GX700 only Asus India Can only be purchased through the website. According to the company, these laptops are available in limited numbers only.

As we mentioned, Asus has also launched the ROG Strix GL502 in India. This compact gaming laptop flaunts a 15.6-inch 4K UHD display. The base variant (with full HD display) of ROG Strix GL502 is priced at Rs 1,27,990. It has Intel Core i7-6800HQ processor and Nvidia GeForce GTX97M GPU for graphics. This laptop can be bought online and offline.