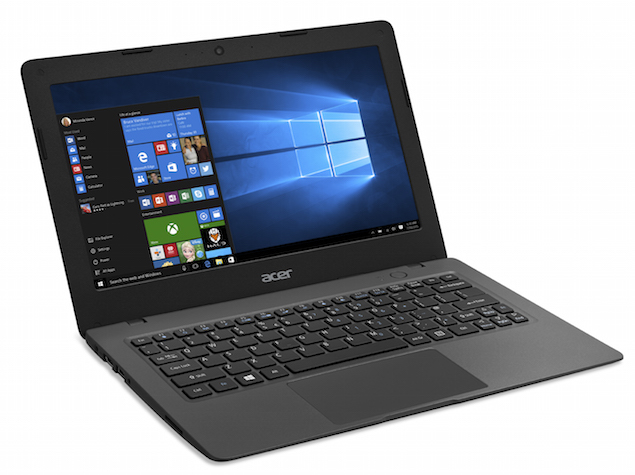 Taiwan’s computer manufacturer Acer launched three cheap laptops in the market on Tuesday. Expanding the Aspire One Cloudbook series, the company launched three laptops that will run on the Windows 10 operating system. The price of these devices ranges from $169 (approximately Rs 10,800) to $199 (Rs 12,700).

Considering the price, the hardware of the Cloudbook 11 AO1-131-C7DW, Cloudbook 11 AO1-121-C1G9 and Cloudbook 14 AO1-431-C8G8 laptops also doesn’t look weak. The dual-core Celeron N3060 processor has been used in these laptops of the Aspire One Cloudbook series, which will run at a speed of 1.6GHz. With this, Turbo Boost Technology has also been used which will give a speed of 2.16GHz. All three laptops have 2GB of RAM. The cheapest CloudBook variant C7DW has 16GB of inbuilt storage, while the rest of the laptops have 32GB. The Cloudbook 11 series model sports an 11-inch display with a resolution of 1366×768 pixels. At the same time, the Cloudbook 14 series model will come with a 14-inch display, but its resolution is also 1366×768 pixels.

If you are worried about the internal storage, then let us tell you that Microsoft is offering 100GB OneDrive voucher with 16GB storage Cloudbook and 1TB with two other models. Cloud storage will be available for one year. Along with the laptop, you will also get the Office 365 Personal subscription plan which will be valid for one year.

In terms of connectivity, the laptop has Wi-Fi 802.11a/c and Bluetooth 4.0. It will come with USB 3.0, USB 2.0, HDMI and SD card slot. However, the company has also made some feature cuts to keep these devices in the budget range, such as webcams. It shoots images in 480p which many people will not like.

Acer claims that both the Cloudbook 11 series laptops will deliver up to 7 hours of battery life on a single charge, while the Cloud 14 series devices will last up to 6 hours.

The biggest highlight of the device is its software. All devices will run on the Windows 10 Home operating system, which costs $120 in the market, plus OneDrive and Office 365 priced separately. Even though the hardware does not have the option to store several GB of data and the display of the device is also not that great, but it is also a fact that you are getting a device with Windows desktop operating system for the price of a budget smartphone.

Cloudbook 11 will go on sale in the US later this month. At the same time, Cloudbook 14 will be available in the market next month. It is expected that the company will soon launch all three devices in other countries as well.